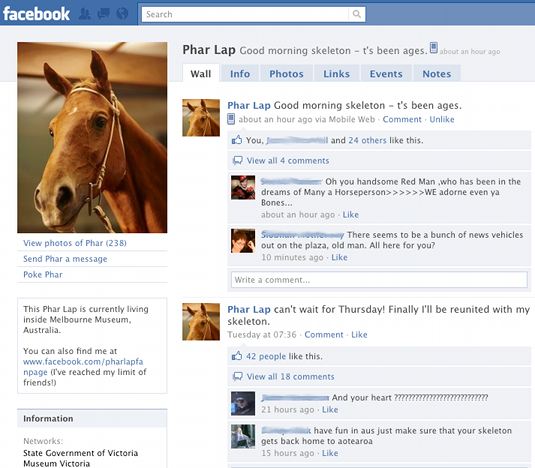 I’ve always been fascinated by the way the public respond to Phar Lap – when I worked at Museum Victoria, the outreach team would regularly get emails written to Phar Lap by people who had seen the film or somehow come across his story.  (I was also never quite sure why they thought emailing a dead horse would work).  So when I first heard that Phar Lap was on Facebook, I was curious to see which museum would have ‘claimed’ Phar Lap.  Does possession of the most charismatic object (the hide) make it easier for Melbourne Museum to step up as the presence of Phar Lap on social media, or were they just the first to be in that space?  The issues around ‘ownership’ and right to speak for an iconic object like Phar Lap make a brilliant case study for how museums represent their collections online.

And today, when I came across three posts (Responses to “Progress on Museum URIs”, Progress on Museum URIs by @sebastianheath, Identifing Objects in Museum Collections by @ekansa) on movements towards stable museum URIs that problematised the “politics of naming and identifying cultural heritage” and the concept of the “exclusive right of museums to identify their objects”, I thought of Phar Lap.  (Which is nice, cos 80 years and one day ago he won the Melbourne Cup).

Of the three museums that own bits of the dead horse, which gets to publish the canonical digital record about Phar Lap? I hope the question sounds silly enough to highlight the challenges and opportunities in translating physical models to the digital realm. Of course each museum can publish a record (specifically, mint a URI) about Phar Lap (and I hope they do) but none of the museums could prevent the others from publishing (and hopefully they wouldn’t want to).

Or as the various blog posts said, “many agents can assert an identity for an object, with those identities together forming a distributed and diverse commentary on the human past”, and museums need to play their part: “a common identifier promoted by and discoverable at the holding institution will ease the process of recognizing that two or more identifiers refer to the ‘same thing'”.

Of course it’s not that simple, and if you’re interested in the questions the museum sector (by which I hopefully don’t only mean me) is grappling with, the museums and the machine-processable web page on Permanent IDs has links to discussions on the MCG list, and I’ve wrestled a bit with how URIs might look at the Science Museum/NMSI (and I need to go back and review the comments left by various generous people).  I’d love to know what other museums are planning, and what consumers of the data might need, so that we can come up with a robust common model for museum URIs. 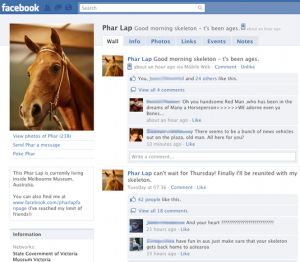 One thought on “What would Phar Lap do? AKA, what happens when Facebook and museum URIs meet a dead horse?”