Crikey. Day three. Where do I start?

We’ve made great progress on our mysterious tool. And it has a name! Some cool design motifs are flowing from that, which in turn means we can really push the user experience design issues over the next day and a half (though we’ve already been making lots of design decisions on the hoof so we can keep dev moving). The Outreach team have also been doing some great communications work, including a Press Release and have lots more in the pipeline. The Dev/Design team did a demo of our work for the Outreach team before dinner – there are lots of little things but the general framework of the tool works as it should – it’s amazing how far we’ve come since lunchtime yesterday.  We still need to do a full deployment (server issues, blah blah), and I’ll feel a lot better when we’ve got that process working and then running smoothly, so that we can keep deploying as we finish major features up to a few hours before launch rather than doing it at the end in a mad panic. I don’t know how people managed code before source control – not only does Github manage versions for it, it makes pulling in code from different people so much easier.

There’s lots to tackle on many different fronts, and it may still end up in a mad rush at the end, but right now, the Dev/Design team is humming along. I’ve been so impressed with the way people have coped with some pretty intense requirements for working with unfamiliar languages or frameworks, and with high levels of uncertainty in a chaotic environment.  I’m trying to keep track of things in Github (with Meghan and Brian as brilliant ‘got my back’ PMs) and keep the key current tasks on a whiteboard so that people know exactly what they need to be getting done at any time. Now that the Outreach team have worked through the key descriptive texts, name and tagline we’ll need to coordinate content production – particularly documentation, microcopy to guide people through the process – really closely, which will probably get tricky as time is short and our tasks are many, but given the people gathered together for OWOT, I have faith that we’ll make it work. 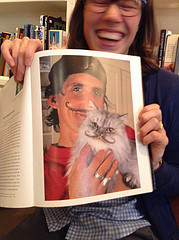 Things I have learnt today: despite two years working on a PhD in digital humanities/digital history, I still have a brain full of technical stuff – it’s a relief to realise it hasn’t atrophied through lack of use. I’ve also realised how much the work I’ve done designing workshops and teaching since starting my PhD have fed into how I work with teams, though it’s hard right now to quantify exactly *how*. Finally, it’s re-affirmed just how much I like making things – but also that it’s important to make those things in the company of people who are scholarly (or at least thoughtful) about subjects beyond tech and inter-disciplinary, and ideally to make things that engage the public as well as researchers. As the end of my PhD approaches, it’s been really useful to step back into this world for a week, and I’ll definitely draw on it when figuring out what to do after the PhD. If someone could just start a CHNM in the UK, I’d be very happy.

I still can’t tell you what we’re making, but I *can* tell you that one of these photos in this post contains a clue (and they all definitely have nothing to do with mild lightheadedness at the end of a long day).