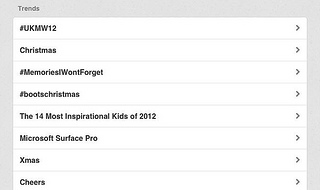 There are a few reports about UKMW12, the Museums Computer Group’s Museums on the Web 2012 conference out there already and I’ve already written about the themes for UKMW12, but as I wanted to note some things I wanted to remember or follow up on later, I might as well share them. But be warned, these notes are very sketchy because I was keeping an eye on lots of other things on the day (and preparing for my first ever AGM as Chair). It’s amazing how quickly one day can go by when you’ve spent so long preparing for it.

The keynotes
Andy Dobson talked about the incredible new energy that ‘creative technology’ is bringing to digital work. He remember going to a show on London’s South Bank and seeing Mosaic, Myst on a mac and Nicholas Negroponte’s Being Digital, all for the first time. My first experiences with the potential of the web were different, but I remember that sense of exciting things being in the very near future, and of the web being something you could do as well as something you used.

I loved that he turned the proliferation of web technologies and the number of acronyms in the standard developer’s toolkit into a positive – ‘it’s exciting, it’s like the early days again’. His broader description of ‘hackers’ as people who apply technology to the creative process was inspiring, and perhaps particularly apt for museums. They’re people who circumvent standard practices, and while hack days can be technology-led they can also be about hacking internal processes.

He emphasised that digital is inherently multi-disciplinary work, encompassing technology, user experience design, sociology, etc and that it doesn’t work if any one discipline hogs the process. If I were to pull out one thread from the day, it might be the idea that ‘digital’ is too big to stay in technology departments while also being too important to deliver without taking seriously the expertise of technologists and related disciplines. As Tate’s John Stack put it, ‘digital doesn’t respect organisational boundaries’, a theme that was echoed by the V&A’s Rich Barrett-Small who called on developers to ‘flex within the scope of the museum’ and not just be ‘grumpy developers in the basement’ while pointing out they also need to be ‘a strong and credible voice’ within the museum. Perhaps as Andrew said, ‘organisational hacking’ is the answer, though ‘change management’ and new forms of collaboration might be a less scary description to use within a museum.
Speaking of ‘makers’, Andrew gave some great examples of artworks and the migration of the web ethos into the physical world. The thought that a Maker Faire can draw in 100,000 people is mind-blowing. I loved his description of the ‘creative gene pool’, partly because museums can play that role in others lives, but sometimes we need a reminder to go and hang out and be inspired by our collections. And to close, a tweet from @Sarah_Fellows that brought Andy’s points right into the sector: ‘#ukmw12 Access, community, sharing, collaboration, learning; interesting that the words which describe digital creatives = heritage ideals’. There was a great question from the audience about ‘how do you get inspiration when recommendation systems are geared at giving you things you already like?’, which doubles as a great challenge for online collections sites. 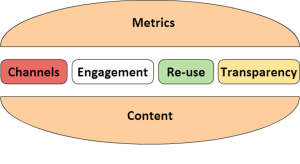 Paul Rowe introduced us to the ‘online collection hamburger‘ in which metrics and content surround channels, engagement, re-use and transparency. He pointed out that ‘Collection content is internet gold – it’s unique, interesting, has an emotional connection with people, places and times’ but also that a museum website is ‘no longer the final destination for publishing online content’. I loved his solution to the fact that a single museum can’t always answer a user’s query: ‘show related content from other museums if you don’t have an object for a search term’. His statement that ‘We shouldn’t be leading people into a dead end just for the sake of keeping them on our website’ should be made into t-shirts and sold outside digital project planning meetings, and his advocacy for ‘wonder’ and surfacing interesting things from your collections made me wish I was working on a museum website again. Paul provided examples from museums across the world, and was a brilliant advocate for both collections and audiences.

Mobile
One of the surprising highlights of the day was the general realisation of the importance of mobile traffic to museum websites. As Andrew Lewis said of the V&A’s digital strategy: ”If it doesn’t work on mobile it’s probably not going to happen’. I suppose I’ve been immersed in research on mobile devices and behaviours (not least for the Culture24-led action research project ‘Let’s Get Real’) so I forget that not everyone is aware of how many of their visitors are on mobile devices. One figure quoted on the day on an ‘increase of 170% in mobile access in last 12 months’ came from some analysis I did for the Let’s Get Real project, so I thought I’d share some more information about that. I was reviewing analytics from the partner websites to see how many had reached the ‘tipping point’ of 20% or more visits on mobiles, and thought I’d compare that to the same period for the previous year (Jan-Aug 2011 and Jan-Aug 2012) to see how fast mobile visits were increasing. It turns out that in general there was a 170% increase in mobile visits to cultural websites. So even if you’re getting less than 20% mobile visits now, it won’t be long before mobile is important for you too. But a caveat – there’s a lot of variation across different organisations (and regions) so as ever, your milage may vary.  The project report will contain lots more detail, but at least now there’s some context for that stat.

Put visitors at the heart of what you do
Whether it’s through data analytics or digital R&D, this was a theme of Tom Grinsted’s talk on making data-based decisions, and lay behind Nick Poole asking how and why museums are sharing their content online (and asking for help in building on his research into different options for sharing collections online) and Katy Beale asking us to prioritise people over products. Claire Ross and Jane Audas talked about the impact of stakeholder management on agile, iterative projects but looked beyond organisational issues to focus on their key positive finding about trusting audiences when moderating social media.

The lesson of the day may be that the whole point of a digital strategy is to help balance the internal needs of a large, often conservative organisation like a museum with the changing needs of our audiences.  It’s clear that the best strategies are a framework for decision-making rather than a static document, but perhaps they’re also a reminder of why we’re doing it in the first place: to connect audiences with knowledge and collections.

And just in case that’s not enough UKMW12 for you, I’ve made a storify of the day: