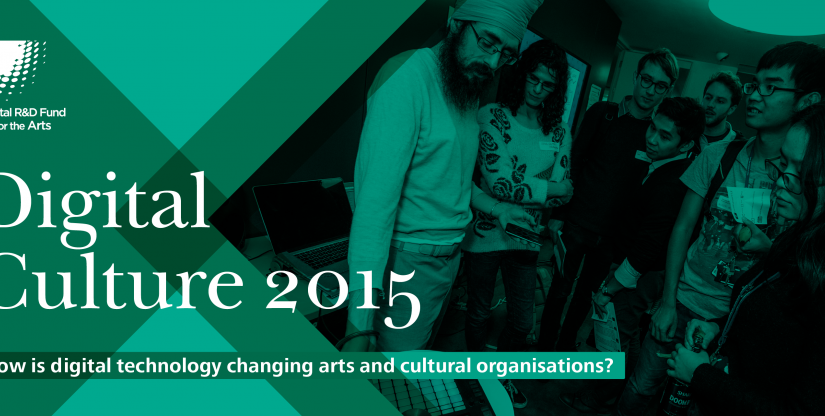 On Friday I was invited to Nesta's Digital Culture Panel event to respond to their 2015 Digital Culture survey on 'How arts and cultural organisations in England use technology' (produced with Arts Council England (ACE) and the Arts and Humanities Research Council (AHRC)). As Chair of the Museums Computer Group (MCG) (a practitioner-led group of over 1500 museum technology professionals), I've been chatting to other groups about the gap between the digital skills available and those needed in the museum sector, so it's a subject close to my heart. In previous years I'd noted that the results didn't seem to represent what I knew of museums and digital from events and working in the sector, so I was curious to see the results.

Some of their key findings for museums (PDF) are below, interspersed with my comments. I read this section before the event, and found I didn't really recognise the picture of museums it presented. 'Museums' mightn't be the most useful grouping for a survey like this – the material that MTM London's Ed Corn presented on the day broke the results down differently, and that made more sense. The c2,500 museums in the UK are too varied in their collections (from dinosaurs to net art), their audiences, and their local and organisational context (from tiny village museums open one afternoon a week, to historic houses, to university museums, to city museums with exhibitions that were built in the 70s, to white cube art galleries, to giants like the British Museum and Tate) to be squished together in one category. Museums tend to be quite siloed, so I'd love to know who fills out the survey, and whether they ask the whole organisation to give them data beforehand.

According to the survey, museums are significantly less likely to engage in:

One of the key messages in Ed Corn's talk was that organisations are experimenting less, evaluating the impact of digital work less, and not using data in digital decision making. They're also scaling back on non-core work; some are focusing on consolidation – fixing the basics like websites (and mobile-friendly sites). Barriers include lack of funding, lack of in-house time, lack of senior digital managers, slow/limited IT systems, and lack of digital supplier. (Many of those barriers were also listed in a small-scale survey on 'issues facing museum technologists' I ran in 2010.)

When you consider the impact of the cuts year on year since 2010, and that 'one in five regional museums at least part closed in 2015', some of those continued barriers are less surprising. At one point everyone I know still in museums seemed to be doing at least one job on top of theirs, as people left and weren't replaced. The cuts might have affected some departments more deeply than others – have many museums lost learning teams? I suspect we've also lost two generations of museum technologists – the retiring generation who first set up mainframe computers in basements, and the first generation of web-ish developers who moved on to other industries as conditions in the sector got more grim/good pay became more important. Fellow panelist Ros Lawler also made the point that museums have to deal with legacy systems while also trying to look at the future, and that museum projects tend to slow when they could be more agile.

Like many in the audience, I really wanted to know who the 'digital leaders' – the 10% of organisations who thought digital was important, did more digital activities and reaped the most benefits from their investment – were, and what made them so successful. What can other organisations learn from them?

It seems that we still need to find ways to share lessons learnt, and to help everyone in the arts and cultural sectors learn how to make the most of digital technologies and social media.  Training that meets the right need at the right time is really hard to organise and fund, and there are already lots of pockets of expertise within organisations – we need to get people talking to each other more! As I said at the event, most technology projects are really about people. Front of house staff, social media staff, collections staff – everyone can contribute something.

If you were there, have read the report or explored the data, I'd love to know what you think. And I'll close with a blatant plug: the MCG has two open calls for papers a year, so please keep an eye out for those calls and suggest talks or volunteer to help out!