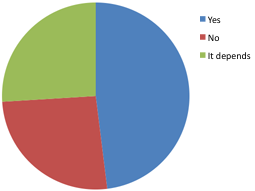 Last Tuesday, I asked ‘If you follow a museum on twitter, is it friendly or weird if it follows you back?‘ after calls from some quarters for #followavisitor #followamember or #MuseumsFollowYouBack days after followamuseum day on Twitter.  The poll gathered 50 responses overall and I’ve presented an overview of the results here.

Question 2 was added in response to a suggestion from a respondent after 20 responses had already been given, so for this reason alone, the results should not be taken as anything other than an interesting indication of responses.  I’ve shared the written responses to various questions, and provided a quick and dirty analysis of the results.

13 further comments were given for ‘it depends’:

I also posted the question on Facebook, and two people said it was weird. One went further, “I think it’s weird, unless you primarily tweet about museums. I assume that anyone following me that is following more than 200 people doesn’t actually read my tweets.”.

7 further comments were given for ‘it depends’:

So it looks like you can’t win – almost 50% of new followers expect you to follow them and 50% either don’t, or only do under some circumstances.  As you can see from the responses to questions 3 and 4 (below), the results have presumably been skewed as 50% of respondents have a close involvement with museums, and a whopping two-thirds have a professional or academic interest in social media. I’m using the free version of SurveyMonkey so can’t easily split out the ‘social media’ or ‘museum professional’ responses from the rest to see if people who are neither have different views on reciprocal following.

Of the people who were able to answer question 2, a very small minority unequivocally minded being followed by a museum account, but 44% of those who answered don’t mind if a museum account doesn’t follow them back.

Another interesting question would have been ‘is it friendly or weird if an organisation follows you after you mention them?’ – if you do any more research into the issue, let me know.

Question 6 asked for ‘Any other comments?’.

So that’s that.   I thought ‘being responsive is different than following’ summed things up quite nicely, but whatever your view, some interesting opinions have been expressed above.
I hadn’t considered before that not following someone back was rude – I must appear terribly rude on my personal accounts but I just can’t keep up with so many accounts, especially as I can have lots of time away from the keyboard.

4 thoughts on “Survey results: is it friendly or weird when a museum twitter account follows you back?”