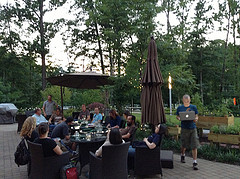 I'm sitting in a hotel next to the George Mason University's Fairfax campus with a bunch of people I (mostly) met last night trying to work out what tool we'll spend the rest of the week building. We're all here for One Week, One Tool, a 'digital humanities barn raising' and our aim is to launch a tool for a community of scholarly users by Friday evening. The wider results should be some lessons about rapidly developing scholarly tools, particularly building audience-focused tools, and hopefully a bunch of new friendships and conversations, and in the future, a community of users and other developers who might contribute code. I'm particularly excited about trying to build a 'minimum viable product' in a week, because it's so unlike working in a museum. If we can keep the scope creep in check, we should be able to build for the most lightweight possible interaction that will let people use our tool while allowing room for the tool to grow according to uses.

We met up last night for introductions and started talking about our week. I'm blogging now in part so that we can look back and remember what it was like before we got stuck into building something – if you don't capture the moment, it's hard to retrieve. The areas of uncertainty will reduce each day, and based on my experience at hack days and longer projects, it's often hard to remember how uncertain things were at the start.

Today we heard from CHNM team members Sharon Leon on project management, Sheila Brennan on project outreach and Patrick Murray-John on coding and then got stuck into the process of trying to figure out what on earth we'll build this week. I don't know how others felt but by lunchtime I felt super impatient to get started because it felt like our conversations about how to build the imaginary thing would be more fruitful when we had something concrete-ish to discuss. (I think I'm also used to hack days, which are actually usually weekends, where you've got much less time to try and build something.) We spent the afternoon discussing possible ideas, refining them, bouncing up and down between detail, finding our way through different types of jargon, swapping between problem spaces and generally finding our way through the thicket of possibilities to some things we would realistically want to make in the time. We went from a splodge of ideas on a whiteboard to more structured 'tool, audience, need' lines based on agile user stories, then went over them again to summarise them so they'd make sense to people viewing them on ideascale.

So now it's over to you (briefly). We're working out what we should build this week, and in addition to your votes, we’d love you to comment on two specific things:

So go have a look at the candidate ideas at http://oneweekonetool.ideascale.com and let us know what you think. It's less about voting than it is about providing more context for ideas you like, and we'll put all the ideas through a reality check based on whether it has identifiable potential users and whether we can build it in a few days. We'll be heading out to lunch tomorrow (Viriginia time) with a decision, so it's a really short window for feedback: 10am American EST. (If it's any consolation, it's a super-short window for us building it too.)

Update Tuesday morning: two other participants have written posts, so go check them out! Amanda Visconti's Digital Projects from Start to Finish: DH Mentorship from One Week One Tool (OWOT), Brian Croxall's Day 1 of OWOT: Check Your Ego at the Door and Jack Dougherty's Learning Moments at One Week One Tool 2013, Day 1.

One thought on “Working out what we're doing: day one of One Week, One Tool”