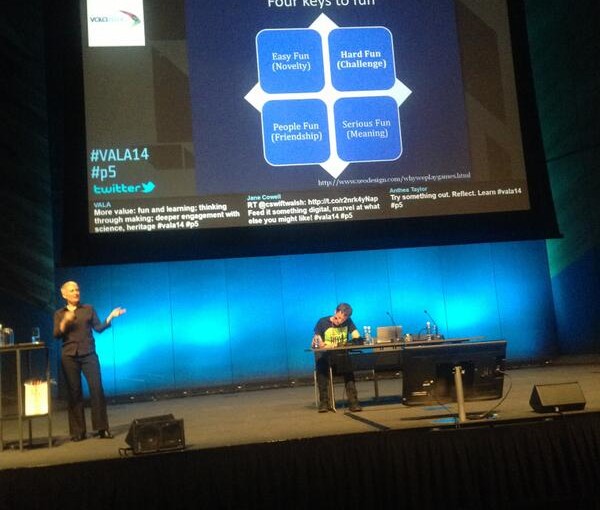 I've just spent a week in Melbourne (my home town, awww) for VALA2014. VALA is about 'libraries, technology and the future' and the conference theme for 2014 was 'streaming with possibilities'. Kim Tairi's briefing (as Chair of the VALA2014 Conference Programme Committee) included the phrases 'stories that will ignite, challenge and excite our audience' and 'don’t be afraid to be controversial or push the boundaries', which was a brilliant challenge and turned out to be a great introduction to the ethos of the conference.

My keynote was on 'Bringing maker culture to cultural organisations'. From my abstract: Should museums, libraries and archives be places for looking at old stuff other people have made, or could they also be places where new creations are inspired and made? If making – writing, designing, building – is the deepest level of engagement with heritage and culture, how can memory institutions avoid the comforting but deadly trap of broadcasting at the public and instead create spaces for curating, creating or conversing with them? Somehow that meant a romp through banana pianos, the link between knitting and historic newspapers, why I like coding, the value of tinkering, secret shoppers and the fact that everyone is a maker of some sort (or was in the past).

Update: videos of the keynotes are now available online! I haven't watched any cos I don't have the Silverlight. I'd recommend them all, but I'm particularly looking forward to re-watching Gene Tan and Matt Finch's keynotes.

I'm sharing my slides below, but Slideshare seems to have stopped including the speaker notes so they're best viewed in conjunction with either of the two blog posts about my keynote that appeared with impressive speed or the tweets from my session. I've storified the tweets at Tweets from keynote 'Bringing maker culture to cultural organisations' at VALA14 – the audience did a fantastic job of summarising my speech, adding their own questions and comments, and sharing links to the sites and projects I mentioned. Yay, librarians! The two posts are Deborah '@deborahfitchett' Fitchett's Bringing maker culture to cultural organisations and Richard '@penanghill' Hayward's Mia Ridge on the Maker Movement (on an unrelated-but-home town note, Richard was my boss many, many years ago!).

3 thoughts on “'Bringing maker culture to cultural organisations' at VALA2014”